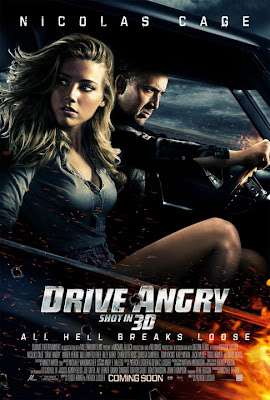 Here are four new clips from Drive Angry 3D starring Nicolas Cage and Amber Heard!
Check out the clips below and let us know what you think! Beware the last clip is NSFW.
Synopsis:
In the high-octane, 3D action-adventure DRIVE ANGRY, Nicolas Cage stars as Milton, a hardened felon who has broken out of hell intent on finding the vicious cult who brutally murdered his daughter and kidnapped her baby.
He joins forces with Piper (Amber Heard) — a sexy, tough-as-nails waitress with a ’69 Charger, who’s also seeking redemption of her own. Now, the two of them are hot on the trail of the deadly leader of the cult (Billy Burke), all while being pursued by an enigmatic killer (William Fichtner) who has been sent by the Devil to retrieve Milton and deliver him back to hell.

Caught in a deadly race against time, Milton has 3 days to avoid capture, avenge his daughter’s death, and save her baby before she’s mercilessly sacrificed by the cult.