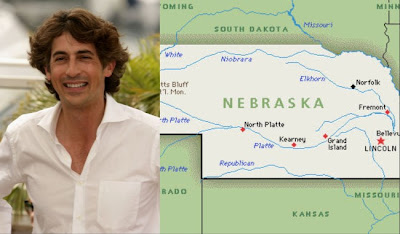 From Sideways To The Descendants to Nebraska, Alexander Payne announces new film!

Academy Award nominated, director Alexander Payne (Sideways) will be back on the big screen with two new films.  The new drama called The Descendants is finished and he has begun moving forward on his next project called Nebraska at Paramount.

Nebraska focuses on an aging alcoholic father who thinks he’s won a million dollar Publisher’s Clearing House sweepstakes prize. He is unbowed when his family tries to dissuade him from making the long trip from Montana to Nebraska to cash in his winnings. So his estranged 20-something son—who doesn’t believe the ticket is a winner—is forced to go along with him for the ride to keep him out of trouble, providing an opportunity to bond with his father after years of separation.
Robert Nelson wrote the script which was brought to Payne by Bona Fide producers Alex Berger and Ron Yerxa (Little Children, Election and Little Miss Sunshine) back when Paramount Vantage was known as Paramount Classics. Payne had just done Sideways and About Schmidt and was not up for taking on another road-trip film even thought he responded to the script. Payne has regrouped and is back with Phil Johnston (writer of the upcoming Cedar Rapids) with plans to shoot the film in the late summer or early fall before The Descendants is released.
No one has been cast as of yet, but the filmmakers have some very early thoughts on who theywould like in the role. Robert Forster to play the father role (who stars in The Descendants) and Casey Affleckfor the role of the son.  No offiical deals have been made for either actor and Yerxa insists that full-on casting and auditions will not start until much later in the year after Payne is fully satisfied with the script. Yerxa goes ont to say that, “Casting is still wide open. Alexander can’t cast an actor until he’s read for the part and he knows he’s exactly right for it.”
I mildly enjoyed About Schmidt and was not a huge fan of Sideways. I loved Juno, Little Miss Sunshine and Slumdog Millionair which this team was inovlved with.  Cedar Rapids looks hilarious with Ed Helms. We will be sure to share more news with you as it becomes available!