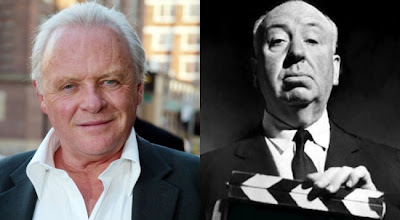 Anthony Hopkins is in negotiations to portray Alfred Hitchcock in the upcoming film Alfred Hitchcock and the Making of Psycho,based on the adaptation of the Stephen Rebello‘s book for Montecito Pictures.

Sacha Gervasi (Anvil! The Story of Anvil) is currently in talks to direct Hitchcock. Montecito is developing the project which will go to Paramount for development. John McLaughlin (Black Swan) penned the script that focuses on the relationship between Hitchcock and his wife Alma Reville.
Rebello’s book was published in 1998 and follows the master of suspense during the height of his career when he decided to make a “lowly” horror movie. None of the studios would finance the film so Hitchcock raised the funds himself. Psycho became one of his biggest hits and one of the most influential films of all time.
No official deals have been made with Hopkins or Gervasi at this time, but they are imminent. I think that Hopkins is the perfect fit for the role not only is he a great actor, but he has similar stature features and on top of that he’s British. Hopkins can next bee seen in The Rite opening on January 28.
What are your thoughts on this news?