BLACK PANTHER Back In Business At Marvel Studios 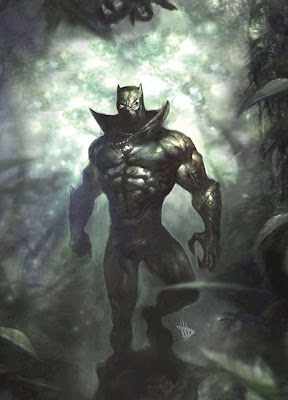 The Black Panther is back in business at Marvel Studios.
Mark Bailey who has mostly worked on documentary films has been hired to pen a script based on the king of a resource-rich fictional African country who becomes a super hero. Marvel’s Kevin Feige is set to produce.

The Black Panther is seen as the first black hero in mainstream comics, He firt appeard in 1966 as part of the Fantastic Fourcomic books. A big-screen version has been in the works for awhile. It was first in development with Wesley Snipes starring for Columbia in the early 1990s.
Since then the project has changed hands a few times. It transferred to Artisan Entertainment with Snipes still attached. The Panther came back to Marvel in 2005 from Lionsgate, which bought Artisan in 2003.
Bailey’s background in documentary films seems like an odd fit to me He has been a writer or story editor on hard-hitting HBO documentaries such as Pandemic: Facing AIDS and Ghost of Abu Ghraib. Doug Limans is set to direct Bailey’s most recent project for Chockstone Productions. The film is a feature adaptation of the non-fiction book The Last of the Tribe: The Epic Quest to Save a Lone Man in the Amazon.
On the other hands, Bailey has dealt with some very real subject matter which could boad well for the film by adding realism and grittiness to the project.
What are your thoughts on this news? Are you excited to finally see Black Panther on the big screen?

BLACK PANTHER Back In Business At Marvel Studios