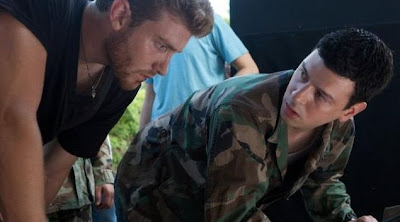 Here is the trailer for Brotherhood from director Will Cannon.

The film stars Trevor Morgan, Jon Foster, Lou Taylor Pucci, Arlen Escarpeta, Jesse Steccato, Jennifer Sipes, Luke Sexton and Chad Halbrook.
Synopsis:
College freshman Adam Buckley finds himself blindfolded in the back of a van dealing with the fact that he has to rob a convenience store as the final step of his initiation into the Sigma Zeta Chi fraternity. Minutes later he finds himself dealing with the fact that a fellow-pledge just got shot while doing it.

Frank, the senior fraternity brother in charge of the night’s events, is able to get the injured pledge out of the store alive, but the fraternity’s troubles are just beginning. Thinking they can get out of the situation without taking the pledge to a hospital, Frank decides the group will handle things themselves. But when every move is met with disaster, Adam must find it within himself to go against Frank and his new brothers in order to save his friend’s life

This movie looks pretty damn cool and has a great cast. I am a fan of Lou Taylor Pucci so it’s cool to see him in the film. Check out the trailer below and share your thoughts!
Brotherhood arrives in theaters February 25th, 2011