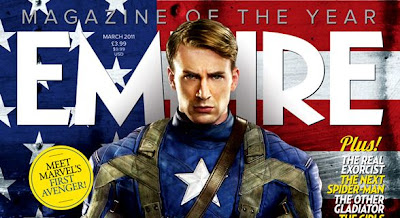 Captain America will be gracing the upcoming cover of Empire Magazine. The issue will include more new images of Chris Evans as the star spangled Avenger. 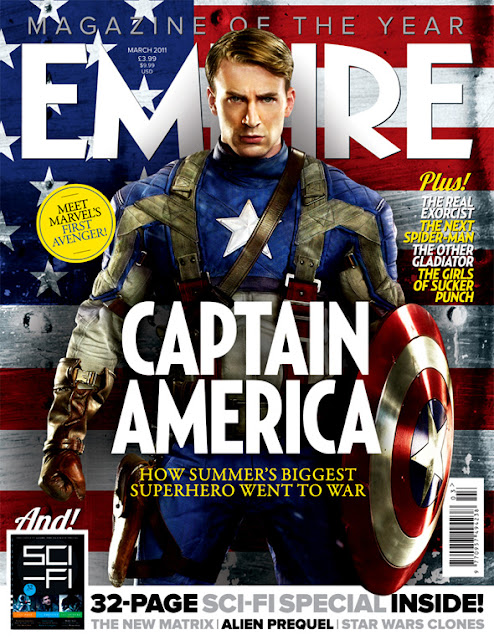 It will also feature quotes from director Joe Johnston and Marvel President Kevin Feige. Here’s what Feige had to say,

Scripts had been developed that took place half in World War Two, half in the modern day and none of those scripts were particularly successful because the costume ended up overshadowing the man. So we finally said, ‘If we could make a Captain America movie any way we wanted to make it, how would we make it?’ Well, we’d set the entire movie in the past, in that period, with all of the Marvel trimmings. And so we made the fun, kick-ass Captain America movie we wanted to.

That sounds amazing, I am looking forward to this movie so much. Johnston went on to tell Empire,

Evans then goes on to to talk about the character he’s playing, and how he’s not just an American hero,

I think he’s the ideal human, not just American. It’s what being a good person is. Steve’s managed to overcome all the shortcomings he’s had in life and he does what’s good and what he believes is right.

The film also stars, Hugo Weaving, Tommy Lee Jones, Stanley Tucci, Haley Atwell, Sebastian Stan, Dominic Cooper, Toby Jones and Neal McDonough. Captain America is set to be unleashed on July 22nd, 2011.
Official Synopsis:
The year is 1942, and Steve Rogers is a scrawny lad who desperately wants to fight Nazis for his country but can’t because he’s been deemed physically unfit. His fate — and his physique — is radically transformed when he signs up for Project: Rebirth, a secret military operation that turns wimps into studs using drugs and assorted sci-fi hoo-ha. There’s a love interest (Major Peggy Carter, played Haley Atwell), there’s a sidekick (Bucky Barnes, played by Sebastian Stans), and there’s the Red Skull (Hugo Weaving), Hitler’s treacherous head of advanced weaponry, whose own plan for world domination involves a magical object known as The Tesseract (comic fans know it better as The Cosmic Cube).
Source: Empire