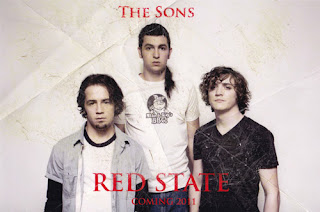 Kevin Smith‘s Red State has been receiving a lot of press during Sundance, not all of it good. I guess any news can be good news because people are still talking about you. Most of the cast of Red State will return in Smith’s next (and allegedly final) film, Hit Somebody.
Well some of his the cast members opted to talk to MTV while they were in Park City.

Hit Somebody is based on the Warren Zevon song of the same name. Nicholas Braun is playing the lead role of Buddy McCracken and Kyle Gallner will portray a Gretzky-like hockey pro. MTV also announced that Michael Angarano will be starring in the film. Up until now, it was thought to be the case, but now it’s confirmed. Here is what he had to say:

The song features lyrics which say, “A Russian with a stick heading straight for his head.” It’s quite possible that Angarano and Braun will have a big fight scene in the movie. The cast will have to learn to skate before they practice their fight skills:
Braun mentioned that he’s been practicing his ice skating. He said he’s been getting better lately and stated,

“I can skate, yeah. I’ve probably skated about ten times in my life. So, I’m good. I looked like a good,” he said, (perhaps referencing the line from the song, “There’s always room on our team for a goon”). “I can pick it up. I think skating’s not too difficult.”

The cast is not set in stone according to Gallner,

“It’s nothing more than just a conversation with Kevin being like, ‘Hey, I’d like you to be in my movie’.

The cast seems to have great chemistry so it would be great to see them in the film. According to Braun, filming is anticipated to run from July to November of this year.

“I think what he wants to do is shoot all the hockey stuff first, the action sequences first, so we get that out of the way,” Braun told us, “Then he can just shoot story the rest of the time.”

Would you like to see these actors in Hit Somebody?

6 I AM NUMBER FOUR Clips Arrive