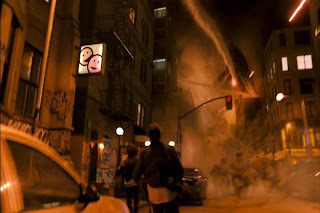 Cloverfield 2 is not is not looking too good according to director Matt Reeves!

Reeves spoke to Bloody-Disgusting while doing press for DVD/Blu-ray release of Let Me Inon Feb 1st. He revealed that he has not had the time to hash out the story with producer J.J. Abrams, and screenwriter Drew Goddard. He also stated that if they can’t all agree on a good story that a sequel may never get made.
Here is what Reeves said:

“Unfortunately, I don’t have any [news]. We’re just…you know, somebody was saying to me that I had said something about, ‘well, we’re gonna try and get the band back together.’ And the band is still not back together, we’re just still talking about getting back together. But we haven’t really had a chance to talk about it. I mean, J.J. is eding ‘Super 8’ right now, he’s got a very, very intense schedule right now that he’s working on. And Drew [Goddard] is writing Steven Spielberg’s next movie, I think, after the Abraham Lincoln film. He’s doing ‘Robopocalypse’. So everybody’s very, very busy. But I’m sure we’ll get together one of these days and sort of bounce it around until we come up with something that we get excited about. And if we don’t, then we won’t make it.”

I really enjoyed Cloverfield and would love to see a sequel. We will keep you up to date on how this story develops!