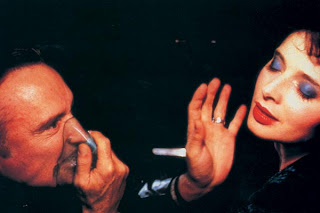 Some cool details have been released about the upcoming Blu-ray release of Blue Velvet!

Unfortunately there were a number of scenes deleted from the final edit of Blue Velvet, which is a bummer because it is an amazing film. David Lynch announced some great news for fans of the film in a recent interview.

In a strange twist of fate, the scenes were found and are set to be included on the upcoming Blu-ray release.
Check out the quotes below from Dugpa, transcribed from KCRW’s Morning Becomes Eclectic:

Man oh man. You know, there is a thing called b-negative, or outtakes, or lifts, that don’t make it into the film. And in the old days, those things sat around and maybe became dangerously close to being tossed away. Then the internet comes, and people want to see deleted scenes and things like this, so those things become more and more valuable.

So, one day I looked into seeing where the lifts were because some of these scenes on their own would be beautiful to see again. So I find out that Dino, the producer, doesn’t know where they are. They’ve gone. His company went bankrupt, it was taken over by another company, and then it was sold to other companies. No one knew where they were, they were gone. So depressing.

Lately, those have been found. Somewhere up in Seattle. It’s incredible. I’m seeing stuff I thought was gone forever.

To get an idea of what scenes will be included you can see them below:
Lynch’s contract stipulated that he deliver a film that run for two hours or less – two frames longer and he would have gone over. Could this mean some of those scenes could make their way back into the film and be a part of a possible “Director’s Cut” of some kind? Here is what the director had to say about that:

Hopefully some of those scenes (some of them aren’t worth putting back together) will end up on the new Blu Ray.

I think that Blue Velvet is the best David Lynch feature film and this is some great news. I can’t wait to see Dennis Hopper on Blu-ray. What are your thoughts of this news?
Source: Bleeding Cool