Do You Feel Ricky Gervais Went Over The Line With His Jokes During The Golden Globes Last Night? 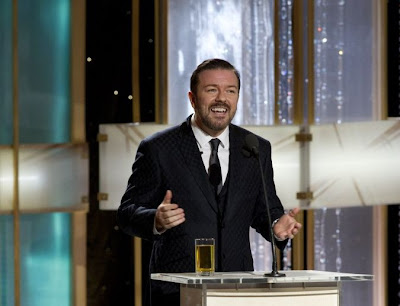 If so you are not alone, apparently HFPA President Philip Berk and others feel this way! Berk has yet to say whether he will support Gervais coming back next year.  He states,  ‘Some of the things he said were totally unacceptable’.
Overall he felt the telecast went well and has said the awards were”terrific,” but he felt that Gervais’ jokes about some of the celebrities was too much. Here is what he said to THR,

“He definitely crossed the line. And some of the things were totally unacceptable. But that’s Ricky.””Any of the references to individuals is certainly not something the Hollywood Foreign Press condones.”

Robert Downey Jr. who was the butt of one of Gervais’ jokes called the show “hugely mean-spirited with mildly sinister undertones.” Gervais took a personal shot at Berk while introducing him by saying, “I just had to help him off the toilet and pop his teeth in.”

Gervais did not allow Berk to review every word of the Globes’ script as he normally does. In my opnion he shold have a gist of the tone, but not be allowed to review every word. That would maket the ceremony as boring as Berk’s small bit on stage. I peronslly wonder if Berk is rolled out each year just for the awards show because he seems to look exactly the same every year.

Berk went on to say,

“I had absolutely no idea what Ricky was going to say so anything I heard was at the same time you heard it. When you hire Ricky Gervais, you expect the unexpected.”

There wre rumors that Gervais had been lectured during the show or kept from reappearing at key moments, but Berk dismissed them as “ridiculous.”

“It was always planned that in the section of important awards he was not going to be part of (the show),” says Berk. “He was never called on the carpet, or given a warning or anything else.

Here is the official statement from the HFPA:

“We loved the show. It was a lot of fun and obviously has a lot of people talking. When you hire a comedian like Ricky Gervais, one expects in your face, sometimes outrageous material. Certainly, in this case, he pushed the envelope and occasionally went too far. The HFPA would never condone some of his personal remarks. Overall, however, the show was among the best we’ve ever had and we were pleased.”

At least they recognize that they get what they pay for with Gervais. I enjoy his type of humor and see nothing wrong with it. If it were not for Gervais’ or DeNiro’s times on stage the ceremony would have been a bore.
Did you watch last night?  Have you seen the video compilation of his best jokes from last night? If so what are your thoughts?

Do You Feel Ricky Gervais Went Over The Line With His Jokes During The Golden Globes Last Night?