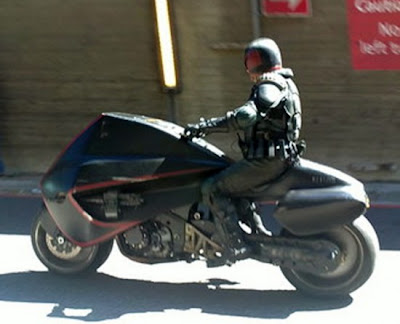 Here is a new set photo from Dredd which shows the full costume and bike of the Lawmaster.

Earlier we posted a photo from the film that showed Karl Urban in costume wearing the helmet. This new photo shows a Judge in full costume riding one of the high-tech Lawmaster bikes used by the Judges in Mega-City One.
Pete Travis is currently fiming in South Africa, with Karl Urban as Judge Dredd, Olivia Thirlby as Judge Anderson and Lena Headey (The Sarah Connor Chronicles and Game of Thrones)as Madeline Madrigal, aka Ma-Ma, aka the leader of a gang who runs one of the blocks in Mega-City One.
So far the photos have been lackluster, but keep in mind we have yet to see on “official” photo. I’ve heard good things about the script by Alex Garland. I can’t wait to see a trailer for the film.
What are your thoughts on the photo and Dredd?
Synopsis:

DREDD takes us to the wild streets of Mega City One, the lone oasis of quasi-civilization on Cursed Earth. Judge Dredd (Karl Urban) is the most feared of elite Street Judges, with the power to enforce the law, sentence offenders and execute them on the spot – if necessary. The endlessly inventive mind of writer Alex Garland and the frenetic vision of director Peter Travis bring DREDD to life as a futuristic neo-noir action film that returns the celebrated character to the dark, visceral incarnation from John Wagner and Carlos Ezquerra’s revered comic strip.