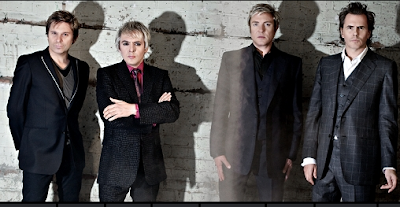 Duran Duran announced today that they will launch their world tour in the UK!

The original members – Simon Le Bon, Nick Rhodes, John Taylor and Roger Taylor – will be touring in support of their 2010 album All You Need Is Now

. The tour kicks off in Newcastle at the Metro Radio Arena on May 18.

Read the full press release below and head over to the band’s official website for more details:
DURAN DURAN ANNOUNCE 11 DATE UK ARENA TOUR “All You Need Is Now”
Tickets On Sale Friday 28th January 9:30am
After a long absence from the live performance arena in the UK Duran Duran will return to their home market for a series of highly anticipated concerts in May 2011. The shows will mark the band’s first European performances in support of their critically acclaimed, new album ‘ALL YOU NEED IS NOW’ and the start of a world tour that will last well into 2012.
The original line up of SIMON LE BON, NICK RHODES, JOHN TAYLOR and ROGER TAYLOR will perform to over 150,000 fans in 11 arena concerts throughout the UK in May. The band will showcase material from their new record, along with classic hits from across their 30 year career. The UK leg of the tour will kick off on Wednesday 18th May at the Newcastle Metro Radio Arena and will end on Saturday 4th June at Sheffield Motorpoint Arena
Tickets priced at £65/£45/£35 (London) Brighton/Bournemouth/Cardiff £55/£45/£35 and all others £55/£40/£30 will go on sale to the general public on Friday 28th January 2011 at 9:30am online at www.gigsandtours.com / www.ticketmaster.co.uk or through the 24 hour credit card hotline: 0844 811 0051 / 0844 826 2826.
Duran Duran VIP Community members will have access to purchase a limited number of presale tickets and VIP packages for the shows below before the general public beginning Wed, 26th January at 8am GMT. Members Click here for all the presale details.
Note – if you are not a community member, you can purchase your tickets via the public onsale.
The full dates are as follows:
Wednesday 18th May 2011  Newcastle Metro Radio ArenaThursday 19th May 2011  Glasgow SECCSaturday 21st May 2011  Birmingham LG ArenaSunday 22nd May 2011  Nottingham Capital FM ArenaMonday 23rd May 2011  Liverpool Echo ArenaSaturday 28th May 2011  London The O2 ArenaMonday 30th May 2011  Brighton CentreTuesday 31st May 2011  Bournemouth International CentreWednesday 1st June 2011  Cardiff International ArenaFriday 3rd June 2011  Manchester MEN ArenaSaturday 4th June 2011  Sheffield Motorpoint Arena