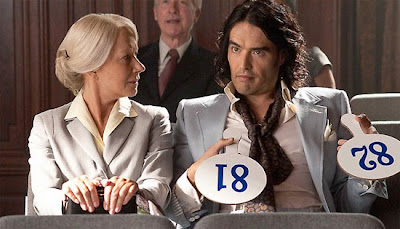 I enjoyed the two Arthur films starring Dudley Moore and was mildly interested to hear that Russell Brand was going to star in a remake. I like Brand and think he will do fine in this film. Here is a quick peek at some footage from the upcoming remake Arthur starring Russell Brand ands Helen Mirren in the role that John Gielgud played in the original.

This extremely short clip gives us a glimpse of what we can expect from the film since there’s not a trailer yet. The clip below is from the British Comedy Awards where Brand was given the Outstanding Contribution to Comedy award. The YouTube clip below shows the full presentation. The footage from Arthur begins at 3:37, or you can use this direct link.
The clip also gives us see a couple bits (from 0:34 and 04:00) of Robert Downey, Jr. on the set of Sherlock Holmes 2. It has been rumored that Russell Brand might show up in that film as well. Check out the video below and share your thoughts about Arthur and the possibility of him appearing in Sherlock Holmes!
Source: /Film