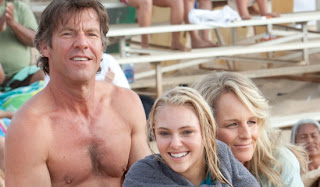 Here’s a new full trailer for Soul Surfer directed by Sean McNamara starring Anna Sophia Robb, Dennis Quaid, Helen Hunt, and Carrie Underwood.
The film is based on the inspiring true story of Bethany Hamilton, the 13-year-old surfer girl who lost her arm in a shark attack. After the incident, she continued to surf, and eventually competed and won several professional championships.
Check out the full trailer for the movie below and let us know what you think!
Official Plot Synopsis:
OUL SURFER is the inspiring true story of teen surfer Bethany Hamilton, who lost her arm in a shark attack and courageously overcame all odds to become a champion again, through her sheer determination and unwavering faith. The film features an all-star cast, including AnnaSophia Robb and Helen Hunt, with Carrie Underwood in her film debut, and Dennis Quaid. In the wake of this life-changing event that took her arm and nearly her life, Bethany’s feisty determination and steadfast beliefs spur her toward an adventurous comeback that gives her the grit to turn her loss into a gift for others.
Bethany (Robb) was born to surf. A natural talent who took to the waves at a young age, she was leading an idyllic, sun-drenched, surfer girl’s life on the Kauai Coast, competing in national competitions with her best friend Alana (Lorraine Nicholson), when everything changed in a heartbeat. On Halloween morning, Bethany was on a typical ocean outing when a 14-foot tiger shark came out of nowhere and seemed to shatter all her dreams. SOUL SURFER reveals the moving aftermath of this headline-making story, as Bethany fights to recover and grapples with the future. Strengthened by the love of her parents, Tom (Quaid) and Cheri (Hunt), she refuses to give in or give up, and begins a bold return to the water. Still, the questions keep hammering her: Why did this happen? Why did she have to lose everything? Will she ever feel the joy and power of riding the waves again? And if she can’t be a surfer, then who is she?
The devastating 2004 tsunami in the Pacific Ocean unexpectedly gives Bethany a new perspective. Traveling to Phuket, Thailand with her youth-group leader Sara Hill (Underwood), she witnesses life beyond her own shoreline and discovers her greater purpose—she can make a difference in the lives of others. Filled with a new sense of hope and direction, she returns home with a renewed resolve to conquer her own limitations and set an encouraging example for people facing adversity.
At the National Championships, Bethany bravely faces off with her fiercest rival, Malina Birch (Sonya Balmores), and takes her astonishing one-armed surfing technique to the limit. But as the horn blows, and the suspenseful competition kicks off, Bethany is no longer thinking about the challenges of her body. Now, her surfing, her biggest dreams and her life have become about pushing her own physical limits to touch the souls of others.
Directed by Sean McNamara, the screenplay was by McNamara, Deborah Schwartz, Douglas Schwartz and Michael Berk. SOUL SURFER is based on the book by Bethany Hamilton, Sheryl Berk and Rick Bundschuh. The screen story by Sean McNamara, Deborah Schwartz, Douglas Schwartz, Michael Berk, Matt R. Allen, Caleb Wilson and Brad Gann.
Soul Surfer hits theaters April 8th, 2011.
Source: EW