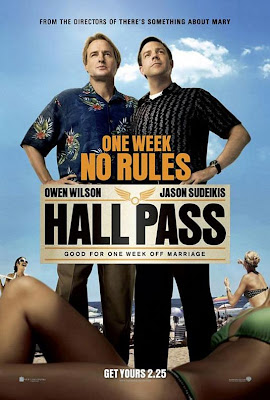 Here is the international trailer for the new Farrelly Brothers comedy Hall Pass.

The film stars Owen Wilson, Jason Sudeikis, Jenna Fischer and Christina Applegate. The film follows two wives who let their husbands return to their single days for one week of unadulterated debauchery. The movie looks like it could be entertainingly funny.

Synopsis:
Best buds Rick and Fred (Owen Wilson and Jason Sudeikis) have both been married for many years. When they begin to show signs of restlessness at home, their wives (Jenna Fischer and Christina Applegate) take a bold approach to revitalize their marriages: they grant the guys a “hall pass,” one week of freedom to do whatever they want. No questions asked. At first, it sounds like a dream come true for Rick and Fred, but they quickly discover that their expectations of the single life—and themselves—are completely and hilariously out of sync with reality.
The film is set to be released on February 25th 2011. Check out the trailer and share your thoughts!
Source: Warner Bros.