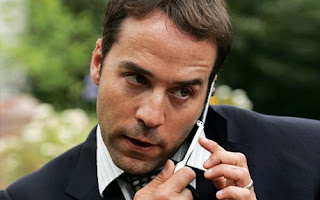 Entourage is one of my favorite shows on TV, unfortunately it’s coming to an end this year. Jeremy Piven recently revealed his thoughts on the challenges his character could face in the show’s final season.

The show first premiered on July 18th, 2004 and has had seven successful seasons and a number of Emmy nominations and wins. The series stars Adrian Grenier, Kevin Connolly, Kevin Dillon, Jerry Ferrara and Jeremy Piven. The show chronicles the career of Vincent Chase, a young A-list movie star, and his childhood friends from Queens, New York City, as they navigate the and downs of the celebrity lifestyle.

The eighth and final season will include ten episodes and is scheduled to air in the summer of 2011. Doug Ellin, the shows creator, is planning to develop a feature film after the series ends, but has yet to be greenlit.
Piven spoke to Collider.com while at Sundance this year and discussed Ari’s upcoming character arc which will lead up to a cliffhanger ending at the end of the season:

“We start up [production] in April. This last season was maybe our best and I had so many amazing things to do. Ari Gold’s wife has maybe had it with him. She wouldn’t [even] show up to his 40th birthday party… and I just hope we can continue that on because his whole world revolves around his family and he’s this great monogamous family man.

“His other dealings with the rest of the world are questionable and he’s an abrasive wrecking ball, but if his foundation is taken away from him… I’d love to see what happens to him.”

What are your thoughts on this news?
Source: DailyBlam

SECONDS APART Trailer Creeps Us Out!