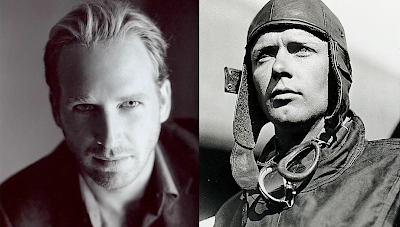 Josh Lucas has been cast as Charles Lindbergh in Clint Eastwood‘s new film J. Edgar, based on the life of J. Edgar Hoover.

The cast keeps getting better and better! Lucas will star alongside Leonardo DiCaprio who is playing Hoover, Armie Hammer as his assistant/closeted lover Clyde Tolson, Damon Herriman as Bruno Hauptmann, the man convicted of kidnapping and killing the Lindbergh baby.  Judi Dench and Ed Westwick as Agent Smith, a clean cut operative with writing skill.

Lucas is a perfect fit for this role and I think this movie is being set up to be awesome.  What are your thoughts on this news?
Here’s a litte rundown on Charles Linbergh:
In the late 1920s and early 1930s, Lindbergh relentlessly used his fame to help promote the rapid development of U.S. commercial aviation. In March 1932, however, his infant son, Charles, Jr., was kidnapped and murdered in what was soon dubbed the “Crime of the Century”, which eventually led to the Lindbergh family fleeing the United States in December 1935 to live in Europe where they remained until the surprise attack on Pearl Harbor by the Imperial Japanese Navy. Before the United States formally entered World War II by declaring war on Japan on December 8, 1941, Lindbergh had been an outspoken advocate of keeping the U.S. out of the world conflict, as was his Congressman father, Charles August Lindbergh, during World War I, and became a leader of the anti-war America First movement. Nonetheless, he supported the war effort after Pearl Harbor and flew many combat missions in the Pacific Theater of World War II as a civilian consultant, even though President Franklin D. Roosevelt had refused to reinstate his Army Air Corps colonel’s commission that he resigned in April 1941.
In his later years, Lindbergh became a prolific prize-winning author, international explorer, inventor, and environmentalist.
Source: Deadline