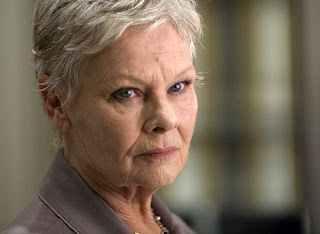 Judi Dench will reprise her role in the new Bond film. Now let’s hope they announce an official title soon. Keep reading for more info on this story.
Judi Dench will reprise her role as M in the upcoming untitled Bond 23. Dench announced the news at the South Bank Sky Arts Awards in London last night. Not much details are known at this time, but she did say she was looking forward to starring opposite Daniel Craig and the chance to work again with Director Sam Mendes.

Dame Dench has appeared in every film since GoldenEye making her casting one of the longer lasting performances in the Bond franchise. Bernard Lee starred as the original M and played the part in nine films (Dr. No through Moonraker). Robert Brown appeared in four (Octopussy through License to Kill).

Bond 23 is expected to begin production soon and has a release date of November 9, 2012.

I can’t see anyone else in the role of M than Dench so this is good news for myself and fellow Bond fans. I also think that Craig is the best Bond since Sean Connery.
What are your thoughts of this news?

Saoirse Ronan To Star In THE HOBBIT