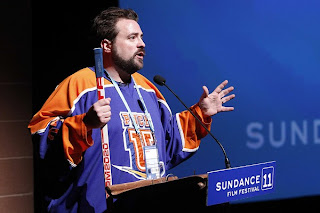 There has been a bunch of news about Kevin Smith and Red State since Sundance kicked off. Now with the closing ceremonies going on it is only fitting that some more news hits the web. Kevin Smith will be re-cutting his film before it heads on it’s U.S. Tour.
Kevin Smith called in to Washington DC’s Kevin and Josh Movie Show this week to discuss Red State. You can listen to or download, the full, unedited Kevin Smith interview, but below are some of the more newsworthy excerpts of the interview:

We knew we didn’t want the movie to come out ’til October. It’s a scary movie, we’re going to hold it ’til like Halloween time… so for me, I felt like, I’m going out on tour between now and then anyway. I’ve got a bunch of gigs ready to go, a bunch of Q&A, a bunch of live Smod, why don’t I just instead of going out one more and being like “One time I wrote the script for Superman…”, show them a movie and we have something new to talk about.

I’m gonna be doing Q&A after the movie, first we’re gonna show the movie and then do the Q&A. To me I look at like I was going out on tour anyway, now I’m just bringing a free movie that you can watch, because these are the exact same prices that people are paying to see me Q&A anyway, so at that point I was like “Instead of keeping the money from the Q&A, like I normally do on tour, I’ll just put it back into the budget for the movie so we can pay our investors back.

And then we’ll come out, October 19th, and if people are like “I don’t want to pay $60 to see your dopey movie and Q&A” it’s totally cool, man. October 19th you’ll be able to see it for whatever the multiplex price is, or an arthouse price, we’re going to try to get it into as many screens as possible but you’ll be paying the ten bucks or whatever it is in your area.

This is my second to last film, I want this Hit Somebody movie next about hockey, and then after that I don’t want to direct film anymore. I don’t have anymore stories to tell. And I’ve always been more of a storyteller writer-director… for me the engine is writing. It’s always been that screenwriting is the engine that’s driven the train that carries the caboose of directing in my case. When you run out of steam for the engine, when you run out of stories to tell as a screenwriter, for me, personally… I didn’t get into writing just to direct, I got in to tell stories.

The only people [from the Red State cast] not returning [to act in Hit Somebody] will be people who can’t geographically make it to Detroit where we’re shooting that movie.

The movie that I showed the cast and crew screening at wrap, two days after we wrapped, I showed them the whole movie, that’s the movie I pretty much showed at Sundance with end credits attached to it… I loved the movie, we knew what we were doing in terms of editing it, it was a beautiful running time and stuff… and then we go to Sundance and I sit in the back and for the first time I get to watch it with 1200 people who have no involvement with the movie, no involvement with me…

So I’m sitting there going “Okay, there’s something I thought would work, didn’t play with the audience”, “Something I thought would get a nice reaction just kinda laid there”, “Boy, that played way bigger than I ever thought it would, maybe we should shape something around there” and just found some time to take out… if I had to guess I’m saying five to ten minutes somewhere in there.

And John [Gordon, producer] fought me on it. John was just like ”Why bother dude, we’re our own bosses, nobody’s telling you to take it out”, like back in the old days Harvey would be “I love it! Take ten minutes out,” no direction at all, just take the time out, so John’s like “We don’t have to do that now, we don’t have to really cut the movie at all” and I said “Yeah, but I’m a filmmaker first and foremost, dude, and I want the movie to play as gangbusters as possible” and if the length of Parks’ speech is making anybody remotely go “Maybe that speech is a little long”… I want them to love Parks as much as I do, so for me, right, I’m an editor, you kill your babies every step of the way as an editor.

Hopefully we’ve got dates [for extra venues in the Red State tour] to announce on Monday or Tuesday.

Our friends at BleedingCool also mentioned that they had also called in to the show this week to ask a few questions of Dark Knight cinematographer Wally Pfister so be sure to keep visit their site for more details on that story.