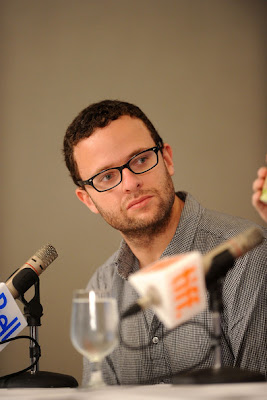 Mark Heyman moves from Black Swan to Age Of Rage!

Mark Heyman is set to write Age of Rage, a sophisticated sci-fi project set up at Fox Searchlight with Marc Webb attached to direct. Mason Novick worked with Webb on (500) Days of Summer and is set to co-produce Rage with Webb.

Heyman co-wrote the screenplay for Black Swan with John McLaughlin and Andres Heinz. He began his career as an assistant to Darren Aronofsky before moving on as a senior vp at Aronofsky’s Protozoa Pictures. He recently was offered a gig adapting the cybernetic thriller Machine Man, set up at Mandalay, that would reunite him with Aronofsky.
Rage takes place in a post-apocalyptic society where all the adults have died forcing a group of teens to work at establishing a new society.
Webb is currently had at work filming Spider-Man and hasn’t made any decisions of his next project.Rage is based on an idea from Webb so this may likely be one of his next projects.
I have been very impressed with Marc Webb and Heyman did an amazing job on Black Swan.  This sounds like a cool story, and one that will bend the mind. What are your thoughts on this news?