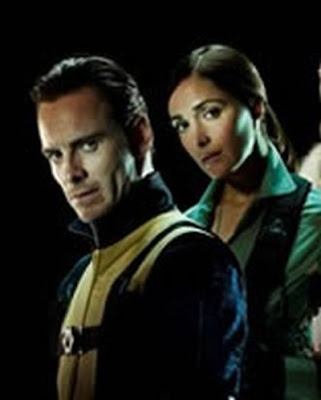 Michael Fassbender shares his thoughts on X-Men: First Class and his character Magneto in a recent interview!

The film has an amazing cast which includes, James McAvoy as Professor Xavier, January Jones (Mad Men) as mutant vixen Emma Frost, Kevin Bacon as Sebastian Shaw, Jennifer Lawrence (Winter’s Bone) as Mystique, Jason Flemyng as Azazel.
Unfortunately we do not have a trailer for the film (release one already 20th Century Fox). This is one film I can’t wait to see so it is always great ot get new details about it. Luckily MSN had the chance to speak with Fassbender about his role as one of the greatest anti-heroes around.
Here are some of the choice excerpts from the interview:
Here is what Fassbender had to say when asked about taking on the role of Magneto and filing the shoes of Ian McKellen:

Hopefully I won’t disappoint the fan base out there, because I know that what Ian McKellen did sort of latched onto a lot of imaginations and was very successful. But what drew me was the script and Matthew Vaughn and the fact that James McAvoy was going to be playing young Xavier. I thought it was a fresh take on the whole story. I’ve never been a big comic book enthusiast, but I thought it was an interesting concept to go back to when they were both friends and initially came together.

Here is Fassbender’s response to reports that the story draws parallels between Xavier and Lehnsherr and Martin Luther King Jr. and Malcolm X in terms of the methods they use to achieve their goals:

You don’t set out to play these things that way, but it’s a good parallel to have in the back of one’s mind, as something to take from real life as a reference. I didn’t study any Malcolm X videos or anything like that. But it clarifies where both these characters are coming from. Hopefully by the end of the film, the audience is like, “Damn, why didn’t these two guys stay together?” They have enough in common and not in common to keep each other in check, and hopefully the audience will feel like they could have worked together for the greater good.

Here is what he had to say bout X-Men: First Class being a reboot or a prequel:

I think the fundamentals are the same. The main thread of the story is still the same. I don’t really know how to answer the question because I haven’t seen this one yet, so I haven’t had a chance to watch it side by side with the other ones and see if they’re relative to each other. Hopefully they are, I think, but also we want to do something fresh as well and open a whole new chapter with this without totally betraying what was laid down before.

When asked about the 60’s setting of the film and look of the costumes and how they are more like the comic versions Fassbender responded by saying:

There’s a scene where they just sort of transformed this hall in London into Buenos Aires Airport, and I just looked around this mock airport and said to myself, “My God, I’ve just had a feeling of being in the ’60s.” From the colors to the costume designs to the production design itself, there’s a sort of nostalgia in the air when you look around the room. It’s just from my own perception of the ’60s, and all that came with it in terms of the music and the fashions and so forth, but all of that comes across in the visual references that we all have. All of that is there to encapsulate the feeling of that era, for sure.

As for our costumes, we went back and forth on so many things. We added things that worked in the comics, took them away again, and stripped them down again. … When it came to the Magneto suit, you know, there’s various stages of what has been done with it, but you will have something that is traditional to the comics. There is a helmet (laughs), which is of course essential to keep Charlie-boy out of my head, and the colors are also kept traditional to the comics, that sort of red and purple. I don’t know if I’m giving you too much, but I’ll say it anyway (laughs).

I can not think of a better actor to be starring as Magneto! Are you excited about the film? Share your thoughts below!

Xu Qing Joins Cast Of LOOPER & So Do These Cool Props!