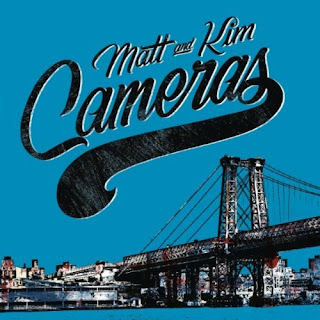 Here is the video premiere of Matt and Kim‘s new video for their single Cameras!
Cameras is the first single from their new album Sidewalks

, out now on FADER Label. The video is part of MTV’s PUSH campaign. This is one of the most unique videos I have seen in a long time. It has Matt and Kim in a crazy fight scene you have to see to believe. Jonathan Del Gatto who has received a Sundance Short Filmmaking Award and a Cannes Golden Palms Nomination directed the video.

The talent does not end there. The video was shot at Apache Studios with producers Marc Petri (The Mummy: Tomb of the Dragon Emperor) and Stacy Paris of Foundation Content and choreographer Freddy Bouciegues of 87 Eleven (Bourne Ultimatum, Ninja Assassin).

Check out the video below and let us know what you think!
Matt and Kim – New Music – More Music Videos

New York, NY – Today, Matt and Kim release the video for “Cameras”, the first single off their new album Sidewalks, out now on FADER Label. Exclusively premiered through MTV’s PUSH campaign, the video comes with a forewarning to expect the unexpected. It features band-mates Matt and Kim taking each other on in a one-on-one, every-man-for-himself fight scene. Filmmaker Jonathan Del Gatto, whose honors include a Sundance Short Filmmaking Award and a Cannes Golden Palms Nomination among others, directed the video.

The video was shot in North Hollywood, CA at Apache Studios with producers Marc Petri (The Mummy: Tomb of the Dragon Emperor) and Stacy Paris of Foundation Content and choreographer Freddy Bouciegues of 87 Eleven (Bourne Ultimatum, Ninja Assassin). Working alongside Del Gatto, the two-day shoot entailed numerous takes and meticulous attention to detail and planning for both Matt and Kim and the crew working alongside them. Prior to shooting, the band went through intensive training to make each and every action come to life. Yes, there was blood, bruising, pain and injury. Shows needed rescheduling and recovery time was prescribed, all on par with the typical jam that seems to go down whenever this band makes a video.

The video debut comes after a weeklong promotion through MTV’s PUSH campaign. Beginning January 17, on-air promos, live performance and interview footage, and custom content ran across all MTV channels and on MTV.com. The video premiere is the culmination of the campaign and celebrates the band’s position as PUSH Artist of the Week.

Sidewalks was released in November on FADER Label and features 10 original tracks. The first week of release saw the album soar immediately to number 3 on the iTunes Top 200 chart and to number 1 on iTunes Alternative chart. Critical accolades poured in from SPIN, Entertainment Weekly, Billboard, Marie Claire, New York Magazine and Pitchfork, among others.

Head over to https://www.mattandkimmusic.com to keep up-to-date on all the newest information regarding Matt and Kim. Stay tuned for the official announcement of Matt and Kim’s Sidewalks Tour happening later this Spring.