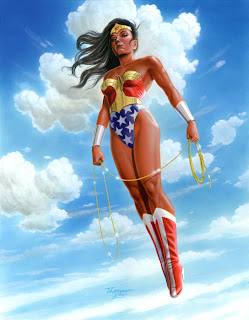 NBC has has picked up Wonder Woman from David E. Kelley and Michael Patrick King’s Mann World! Odd Jobs from J.J. Abrams gets rolled back.
Reporting on this Kelley’s Wonder Woman has been much like riding a roller coaster. It has been on then off again and back and forth, but NBC has finally saved the day by ordering a pilot. Deadline reports that things took a turn for the better after Comcast took over NBC and the new President came in.
Robert Greenblatt is making some bold moves after taking his new post as President at NBC. In addition to Wonder Woman, he gave the green light to Michael Patrick King‘s Mann World, which is also an hour long. Greenblatt has decided to push J.J. Abrams produced Odd Jobs starring Michael Emerson and Terry O’Quinn is being pushed to next season and it will be applied to the same or new Bad Robot project. He also passed on the Josh Schwartz supernatural drama Ghost Angeles starring Rachel Bilson.