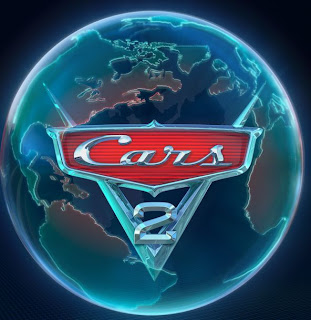 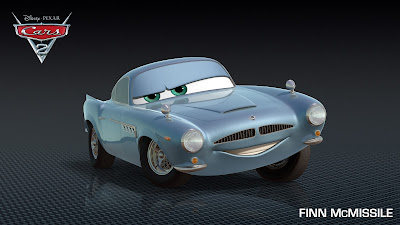 Finn McMissile is a master British spy. Though charming and eloquent, it’s his stealth maneuvering, intelligence and years in the field that enable him to thwart unexpected attacks from bad guys, making quick daredevil escapes.. Finn’s design is sleek and timeless, but he’s also prepared for any tricky situation with an arsenal of ultra-cool gadgets and weaponry, including front and rear grappling hooks, a missile launcher, deployable magnetic explosives and a holographic disguise emitter. As a seasoned professional in the game of international espionage, Finn believes there is a conspiracy brewing during the World Grand Prix. His clandestine work surrounding the global exhibition race puts him on a collision course with Mater, whom he mistakes for an undercover American agent with a genius disguise.
Holley Shiftwell 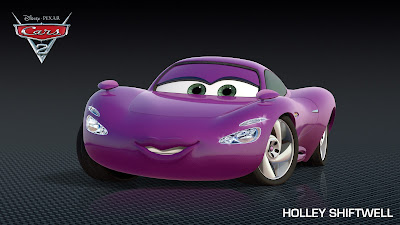 Holley Shiftwell is a beautiful young British desk agent, turned spy-in-training who’s stationed in Tokyo. Well-educated and sharp, she knows every trick in the book—or rather, she relies on every trick in the spy manual. She’s armed with the latest state-of-the-art spy equipment imaginable, from hidden cameras and concealed weapons to a telescoping utility arm and a holographic pop-up display. Holley is a highly motivated agent, but is fresh out of the academy, so her experience is based on lessons learned in school rather than real-life situations. When seasoned international spy Finn McMissile requires Holley’s technical expertise for his latest top-secret field operation, she finds herself pursuing a rendezvous with the most unlikely candidate—Mater, an innocent caught up in the intrigue, who is mesmerized by the beauty of his newest friend.
Official Synopsis:
Star racecar Lightning McQueen and the incomparable tow truck Mater take their friendship to exciting new places in ‘Cars 2’ when they head overseas to compete in the first-ever World Grand Prix to determine the world’s fastest car. But the road to the championship is filled with plenty of potholes, detours and hilarious surprises when Mater gets caught up in an intriguing adventure of his own: international espionage.
Torn between assisting Lightning McQueen in the high-profile race and towing the line in a top-secret spy mission, Mater’s action-packed journey leads him on an explosive chase through the streets of Japan and Europe, trailed by his friends and watched by the whole world. Adding to the fast-paced fun is a colorful new all-car cast that includes secret agents, menacing villains and international racing competitors.
Cars 2 arrives on June 24 in the United States and July 22 in the United Kingdom.