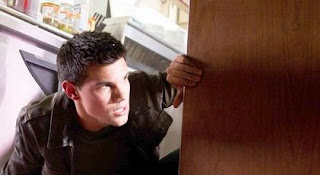 Here is a new image of Taylor Lautner hiding out in a kitchen in his upcoming high concept thriller Abduction. 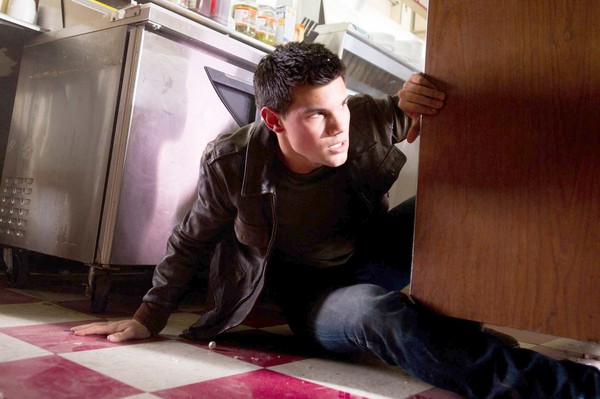 Lautner is perfect give a wooden expressionless performance, but I worry about him leading a film. Am I the only one that feels this way?

Abduction is directed by John Singleton (Boys n the Hood). The story follows a teenager named Nathan, who has long felt disconnected from his parents, and figures out why. That unleashes a chain of violent events. He eventually finds out a crazy ass secret… his “parents” kidnapped him as a child and raised him as their own. The revelation of this unfolds a conspiracy and Nathan and his girlfriend go on the run.
The supporting cast is great, it includes Sigourney Weaver, Lily Collins, Danny Glover, Alfred Molina, Michael Nyqvist, Maria Bello, and Jason Isaacs.
Official Synopsis:
What would you do if you found your own picture on a missing persons website?  Teen Nathan Harper (Taylor Lautner) finds himself facing this very dilemma. Setting out to uncover his real identity, Nathan quickly learns his parents are far from who they say they are. When the police, government agents and shadowy figures start to pursue him, Nathan’s quest for the truth erupts into a full-blown “Bourne”-like man-on-the-run thriller.
Source: LA Times

Taylor Lautner To Star In Adaptation Of INCARCERON