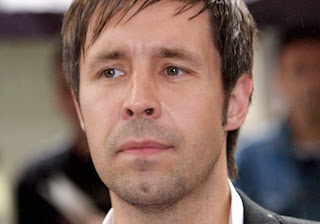 Paddy Considine is currently premiering his film Tyrannosaur at the Sundance Film Festival. While doing press for the film he spoke with Total Film and revealed two new projects.
He stated that he is working on a “ghost story centred on the idea of legacies”, “the story of  young woman haunted by a childhood trauma who in adult life struggles to form meaningful relationships.”

Every time she gets close to somebody she feels this presence.

According to Total Film, Considine was hinting at the possibility of Olivia Colman (Tyrannosaur) would having a role in the film. He also revealed that this film was influenced by another famous horror film:

He plans to shoot the movie in England and says The Exorcist is a reference point for him. But don’t expect pea-puke and spinning heads – the dilemma of the mother when she doubts her own daughter are more his inspiration.

In December, Considine revealed details about The Learning on his official site:

I’m already writing the next film called The Leaning. It’s a ghost story. And after that I have a book called The Years Of The Locust that I am adapting. I don’t want to give away too much… My aim is to be constantly writing or going into production on another film. Keep them rolling along.

The Years of the Locust is a non-fiction account about the underground boxing world from Jon Hotten. Here’s an intriguing excerpt from Scotland on Sunday‘s review of the book:

This is the tragic tale of sociopathic door-to-door salesman turned boxing promoter Rick ‘Elvis’ Parker and his doomed relationship with loyal, naive and ultimately incorruptible fighter Tim Anderson. Parker is a freakishly fat ginger-haired giant with a southern lilt who wants to become the next Don King. He cuts corners, lies, cheats and fixes fights; he’s a man who wouldn’t know a moral compass if one hit him between the eyes.

His boxer Anderson is a handsome, funny former baseball pro who dreams of being the heavyweight champion of the world. But they are a toxic combination that should never have mixed. The results of their collaboration are a train crash.

Considine is a great director and it sounds like fans of his films have a lot to be excited about. What are your thoughts of this news?