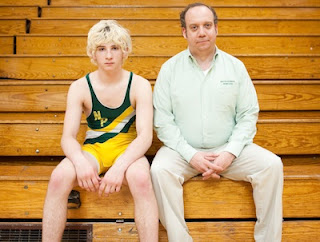 Paul Giamatti has been at Sundance this week promoting his film Win Win. While doing press he confirmed he is indeed set to star in David Cronenberg‘s Cosmopolis. He also spoke a bit about his role in The Hangover 2.

Giamatti is one of my favorite comedic character actors with a lot of edge. I have enjoyed every film I’ve seen him in. Win Win sounds pretty cool from what I’ve seen. Up until now there had been some doubt that the actor would appear in Cosmopolis. He doesn’t know when the film will shoot, but he is doing to play the role of one of the villains pursuing Robert Pattinson‘s character. When he talked to MTV he stated, “I get to stalk him.”

The film is based on Don DeLillo‘s novel of the same name, in which Eric Packer (Pattinson) spends 24 hours more or less encased in his limo and manages to cheat on his wife, deal with the aforementioned stalkers as well as another attack, and lose his fortune.
Giamatti also talked about his small role in The Hangover 2, Apparently he’s only in one scence.

“I just did it with the three guys, who were great..They kind of swore me to secrecy. I play a bad guy in it.”

It’s a shame he won’t have a bigger part in the sequel, but at least he will play a substantial role inCosmopolis. I am looking forward to seeing both films when they are released, are you?
Source: /Film