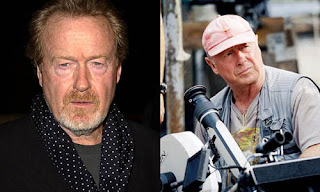 It was announced today that Ridley and Tony Scott a are going to produce The Drivers, a series based on the high-octane 24-hour motor race in Le Mans during the 1950s-1960s.

There has been a strong interest in the 60’s ever since the success of Mad Men on AMC. The Drivers can be added to a list of new shows set during the period like Playboy and Pan Am. Scott Free will co-produce with Headline Pictures and Sennet Entertainment the project. Funding’scoming from FremantleMedia as part of their plan to develop and package drama series for the international market.

The series is based on the book, Shelby: The Man, The Cars, the Legend, written by Wallace A. Wyss, which tells the true story of a group of young drivers from the US, Germany, France, Italy and Britain. These amateur racers are a mix of both friends and rivals, risking everything for a shot on the tracks.
Here is what Ridley Scott had to say about the project:

“I grew up in the North of England at a time when Stirling Moss was a hero. Everyone wanted to be a racing driver. This is a hugely ambitious project and a once-in-a-lifetime opportunity to tell the story of these iconic and legendary men who risked everything to win at Le Mans. It’s an epic story of courage and ambition and a history of racing which has never been told on such a grand scale.”

With the right cast in place and a high production value, this could be a pretty sweet show. I enjoy cars and driving and enjoy period films so this could be right up my alley.
What are your thoughts of this news?

THE KING'S SPEECH Being Re-Edited & Headed For More Theaters!