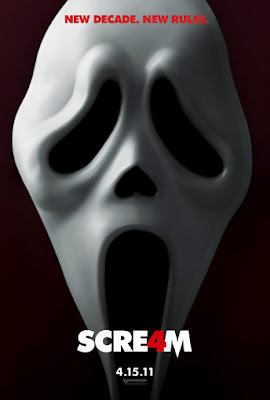 Here is the official trailer for Scream 4 directed by Wes Craven!

The film stars Neve Campbell, Courteney Cox, David Arquette, Britt Robertson, Emma Roberts, Hayden Panettiere, Rory Culkin, Nico Tortorella, Mary McDonnell, Anthony Anderson, Aimee Teegarden, and Marielle Jaffe with confirmed cameos by Anna Paquin, Kristen Bell, Shenae Grimes,and Lucy Hale.
Synopsis:
“Sidney Prescott (Neve Campbell), now the author of a self-help book, returns home to Woodsboro on the last stop of her book tour. There she reconnects with Sheriff Dewey (David Arquette) and Gale (Courteney Cox), who are now married, as well as her cousin Jill (Emma Roberts) and her Aunt Kate (Mary McDonnell). Unfortunately Sidney’s appearance also brings about the return of Ghostface, putting Sidney, Gale, and Dewey, along with Jill, her friends, and the whole town of Woodsboro in danger.”
I am super excited for this installment of the Scream franchise. It looks like this movie is going to have everythign that fans of the films love and more.
Watch the trailer below and let us know your thoughts!