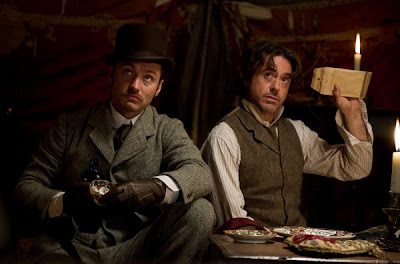 Take a behind the scenes look at the filming of Sherlock Holmes 2!

Entertainment Tonight has released a video of their visit to the set of Guy Ritchie‘s Sherlock Holmes 2. The video show a good amount of footage from the set, and also has interviews with Robert Downey Jr. and Jude Law.

The film also star Noomi Rapace, Jared Harris, Eddie Marsan, Stephen Fry and Gilles Lellouche. It’s set to be released in theaters on December 16th 2011. Check out the behind the scenes video below and tell us what you think!
Plot Synopsis:
Set in 1891 — a year after the last film’s events — the sequel shows Holmes (Robert Downey Jr.) continuing his pursuit of Professor Moriarty (Jared Harris), who, if the investigator’s instincts are correct, might be the world’s first supervillain. Watson (Jude Law), meanwhile, is still trying to be a good partner to his love, Mary Morstan (Kelly Reilly), while keeping Sherlock alive.

This time, though, the compatriots are joined by the feisty Sim, played by actress Noomi Rapace, perhaps still best known to audiences for originating the role of punk rock computer hackerLisbeth Salander in the Swedish movie adaptations of Stieg Larsson’s Millennium trilogy. Also making an appearance is Sherlock’s brotherMycroft Holmes, played by actorStephen Fry, a character who producer Susan Downey describes as “stranger and perhaps even more brilliant” than the English detective.

“Unlike last time, where Holmes kept getting Watson into trouble,” adds actor Downey, “this time Watson is getting Holmes out of trouble, and they’re both in deeper trouble than I think the audience could have imagined we could go…. All manner of nastiness has just occurred.”