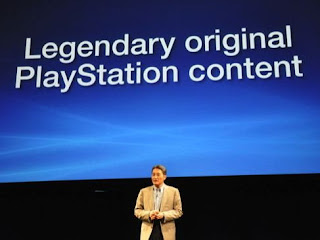 Sony announced their new PlayStation Suite which will provide content on Android phones and other devices. This is great news for Android users like myself. The bad news for me is that I’ll have to update my phone. Keep reading for the full details and to check out the videos of the event.

Earlier we gave you your first look at the new PlayStation Phone, which looks pretty awesome.

According to the official press release, the service will be “starting with original PlayStation games (PSone classics).” Hopefully PSP games will make their way to Android as well, since there are not a bunch of PSone titles available digitally.
Watch the full video announcement from Sony and keep scrolling down to read the press release. Be sure to share your thoughts on this news!
08:50 — Announcement of the PlayStation Suite for Android devices.
13:40 — Game Development for PlayStation Suite, and Character Licensing.
The next video discusses both the plans for the NGP and our first official video of the device:
0:00 — Future integration between PlayStation Suite, PlayStation Network, and PlayStation 3.
01:40 — Announcement of Next Generation Portable.
03:48 — Sony’s Announcement Video ‘Play Life.’
06:10 — First Official Reveal of the Next Generation Portable.
08:45 — Device hardware and specs detailed, capabilities and features explained.
10:30 — President, Worldwide studios, Sony Computer Entertainment Shuhei Yoshida introduces first looks at gameplay with clips of Killzone, Reality Fighters, Gravity Daze, and more. Use of rear touch screen also shown.
14:00 — Uncharted for NGP played on stage.
The video shows how the NGP will be changing how we play games by combining gyroscopes, touch controls, and simulated actions:
00:15 — Uncharted played using rear touch panel, front touch screen, and gyro sensor to give control gameplay.
03:30 — Vice President of development Muneki Shimada discusses the NGP’s user interface.
13:45 — Location-based connectivity and multiplayer detailed.
At this time it’s not known which Capcom titles will be released on the NGP. SEGA has been very busy designing games for the new handheld:
00:15 — SEGA rolls out first look at their title.
05:00 — Tecmo Koei takes the stage, unveiling new NGP Musou game.
10:00 — Konami‘s Hideo Kojima shows the performance of NGP with Metal Gear Solidported video, and discuss the future of cloud-based computing.
The North Americans haven’t been left out of the NGP-party, and the potential for the Unreal Engine could be limitless if Epic Games is having a chance to do some work with the new device:
00:00 — Epic‘s Tim Sweeney shows off the NGP’s processing power, claiming it is ’4 times’ as powerful as other mobile devices with demonstration of Dungeon Defenders, a game originally developed for the PS3. It only took one week to convert it to the NGP.
04:40 — Philip Earl represents the Activision contingent, announcing that Call of Duty will be coming to the NGP.
08:55 — Hirai’s closing comments on the future of Playstation, and their place in the changing face of entertainment.
The NGP looks unbelievable. Hey, iPhone and 3DS it looks like you have a target on your back big time! What are your thoughts of this news?
Here is the official press release:

Sony Computer Entertainment to Unveil ‘PlayStation®Suite,’ Delivering the World of PlayStation® to Android™ Based Portable Devices

In the dramatically evolving and diversifying mobile market, the number of users who enjoy games casually on a variety of devices including mobile phones, smart-phones and tablet PCs, has been increasing significantly. By offering “PlayStation quality” content to this rapidly growing market, SCE will not only deliver the PlayStation experience to a wider base of users around the globe, but will also be able to offer game developers and publishers the potential to further expand their business opportunities to these devices.

In providing the PlayStation experience on Android based portable devices, SCE will commence a “PlayStation®Certified” license program for hardware manufacturers. Through this program, SCE will offer necessary support, including development support as well as logo licensing, to ensure the delivery of PlayStation quality experience across various devices.

On the software front, SCE plans to provide PS Suite content within this calendar year, starting with original PlayStation games*(2) (PS one® classics) that will allow users to enjoy “PlayStation quality” gameplay on their Android based portable devices. SCE also plans to open PlayStation®Store where users will be able to download content in an easy to use environment, directly via the Android based portable devices. Moreover, SCE will provide a new game development environment in an effort to ensure new and compelling content is delivered on PS Suite, which will also offer opportunities for a wider base of developers and publishers to further expand their business on various portable devices.

SCE will vigorously enhance the entertainment world, delivering the PlayStation experience to a wider base of users.

*(2) PS one game console software title. We will announce the titles when ready.