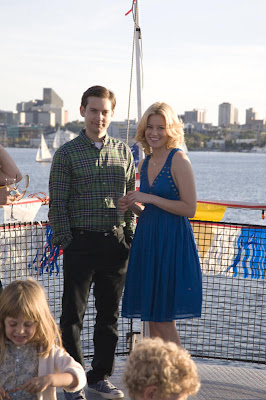 The Weinstein Co. is close to purchasing worldwide rights to writer-director Jacob Aaron Estes’ quirky drama The Details for about $8 million. This marks the second major purchase they have made at this year’s Sundance Fest.

It all started with the raccoons. After 10 years of marriage, Jeff and Nealy have a young son, an idyllic suburban life, and a marriage that’s stuck. Accordingly, Jeff decides to plant a perfect backyard lawn. Enter the raccoons, who repeatedly tear up his grass. When Jeff tries to eradicate these meddlesome vandals, his efforts initiate a bewildering chain reaction involving a crazy cat lady, multiple infidelities, extortion, organ donation, and somebody on the wrong end of a bow and arrow.

Devilish throughout, The Details is both a love story and a horror story (of the existential kind). The root of Jeff’s dread (and subsequent misdeeds) is that he wants to love his wife but no longer knows how. Filmmaker Jacob Aaron Estes plays with the notion that the tiniest thing can unravel our lives. His narrative spontaneity and anarchic spirit allow characters to keep digging themselves into deeper moral holes to see if the universe will punish them. The result is a darkly funny meditation on marital malaise.

The Details debuted Monday night and was well received, attracting immediate interest from buyers, including Summit Entertainment. My Idiot Brother was the first purchase of the fest for TWC and Ron Burkle who bought the comedy for more than $6 million on Sunday. The company also picked up rights to the film in the U.K., Germany, France and Japan.
What are your thoughts on this news?