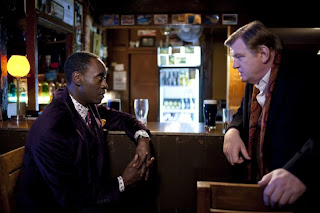 The Irish action comedy The Guard is the latest film to be picked up at Sundance this year. Sony Pictures Classics is working to close a deal for domestic distribution rights for the film written and directed byJohn Michael McDonagh.

The film stars Brendan Gleeson as a local cop who forced to assist an FBI agent (Don Cheadle) chasing the members of an international drug smuggling ring that has taken up residence in the Irish town. McDonagh makes his feature debut on The Guard. He is the brother of In Bruges writer/director Martin McDonagh who served as executive producer).
This marks the third deal of the fest for SPC partners Michael Barker and Tom Bernard, but the first one they made while at Park City. They are set to distribute Morgan Spurlock‘s documentary POM Wonderful Presents: The Greatest Story Ever Sold. They also have made sight-unseen preemptive acquisition of Take Shelter from director Jeff Nichols. The drama stars Michael Shannon as a small town man who builds a storm cellar in his yard after dreams tell him that an imminent apocalyptic event.Jessica Chastain is set to play his wife.
What are your thoughts on this news?