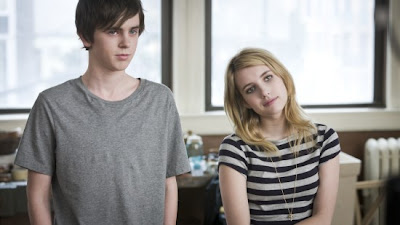 Fox Searchlight has picked up to the majority of worldwide rights to Homework written and directed by Gavin Wiesen.

The film stars Freddie Highmore, Emma Roberts, Michael Angarano, Elizabeth Reaser, Rita Wilson, Sam Robards and Blair Underwood.  Homework was produced by P. Jennifer Dana, Kara Baker, Gia Walsh and Darren Goldberg and is scheduled to be released in 2011.
Here’s the official synopsis for the film:
George (Freddie Highmore), a smart teenage loner, has made it to his senior year despite the fact that he has never completed an assignment. Enter Sally (Emma Roberts), the school beauty, who hides her melancholy behind the protective mask of popularity. An unlikely connection blooms as these kindred spirits bond over their troubled parental relationships. With his education hanging by a thread, George concedes to let Dustin mentor him. Dustin is a successful artist, and he’s 25 years old—finally, someone George can respect! With Sally and Dustin by his side, George blossoms and dares to look toward the future. But George soon learns that life and love have a way of dashing dreams as rites of passage and mounds of homework threaten to do him in on the eve of his graduation.
I really liked Roberts in It’s Kind Of A Funny Story this year and think this sounds pretty good. What are your thoughts of the news?


For the full details check out the full press release below from Deadline.

“Homework is a real coming of age story, it touched us with its genuine performances, depth and wit,” said Utley. “We’re thrilled to continue Searchlight’s tradition of being a home to first time filmmakers.”

“We couldn’t have found a better home than Searchlight, a company renowned for championing new storytellers,” says Wiesen.

“We are delighted to have found an impassioned partner for Homework. Searchlight shares our passion for this gem of a film. We couldn’t be in better hands,” say Dana, Baker, Walsh and Goldberg.

HOMEWORK stars Freddie Highmore as George, a lonely and fatalistic teen who’s made it all the way to his senior year without ever having done a real day of work, who is befriended by Sally, a beautiful and complicated girl who recognizes in him a kindred spirit.