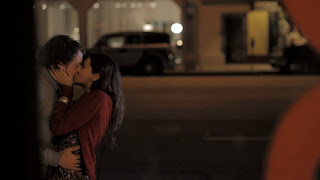 Paramount Pictures has purchased Like Crazy from director Drake Doremus for $4 million after an all-night bidding session.

This heartfelt drama stars Anton Yelchin and Felicity Jones as two young lovers who fall for each other when they are both in Los Angeles, but have to find a way to make the relationship work after her student visa runs out and she has to return to her London home.

The repored selling price from EW is a solid amount for an indie film such as Like Crazy. The purchase will allow the film to be seen by a wider audience. Doremus brought his raunchy road-trip film Douchebag to Sundance last year. Ben York Jones, who starred in Douchebag, co-wrote the the script with Doremus forLike Crazy, which was produced by Jonathan Schwartz and Andrea Sperling.

I enjoyed Going the Distance so I will probably enjoy the story of Like Crazy. I also am a big fan of Yelchin. Be sure to read a review of Like Crazy from GeekTyrant HERE.