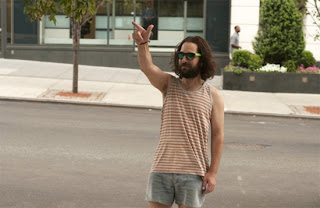 Deals happen just like that at Sundance. The Weinstein Company and Ron Burkle have made a huge purchase of the Paul Rudd comedy My Idiot Brother directed by Jesse Peretz.

Earlier we reported that Like Crazy was bought for $4 million and I thought that was high. This deal just announced is even bigger, amounting to a minimum guarantee of $6 million-$7 million, and a $15 million P&A commitment for a wide theatrical release. This means that My Idiot Brother is currently the largest deal of the festival so far. What makes this deal interesting is that Ron Burkle, reportedly the first of a blooming relationship, partnered on the deal. He backed the Weinstein’s attempt to buy MiramaxFilms and its library. As usual, this deal is a result of negotiations that lasted all last night.
The comedy stars Rudd as a “paroled pot dealer who moves in with a succession of sisters and turns their lives upside down as he tries to get back on his feet.” Burkle saw the premiere and loved what he saw and decided to partner on the deal. The deal is certainly a bold move for the reconstituted Weinstein Company, which acquired domestic distribution as well as Germany, France, UK and Japan. T
I am a huge fan of Rudd and this sounds like a hilarious film. What are your thoughts of this news?