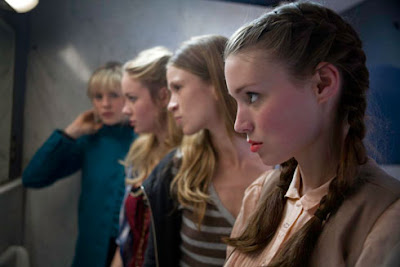 Anchor Bay is set to distribute Tanner Hall, the directorial debut of Francesca Gregorini and Tatianavon Furstenberg.
The film premiered last fall at TIFF to buzz, but gained traction as a result or Rooney Mara landing the lead role in David Fincher‘s The Girl With The Dragon Tattoo.

After Toronto, the film looked like it would be picked up right away, but that did not happen. Anchor Bay has stepped in and is bought the domestic, UK, Australia and New Zealand rights. As you would expect,Tanner Hall will be released in near the December 21st release date of Dragon Tattoo.
The coming-of-age film drama also stars Tom Everett Scott, Chris Kattan and Amy Sedaris and takes place at a boarding school in a New England town. The story follows four restless teens as they come of age. Mara, Brie Larsen, Georgia King and Amy Ferguson star as the four teens.
I can’t wait to see Mara in Dragon Tattoo and this film sounds interesting. What are your thoughts of this film, does it sound like something you want to see?
Source: Deadline