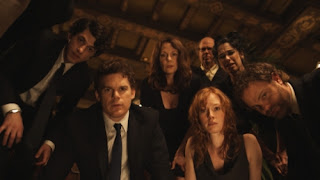 Here is the official trailer for the comedy Peep World from director Barry Blaustein for IFC Films.

Blaustein previously directed such films as Beyond the Mat, The Ringer and Guys ‘N Divas: Battle of the High School Musicals.

Peep World follows four siblings whose lives are ruined when a book exposes all of their secrets and embarrassing problems of their dysfunctional family. It has a great cast that includes, Michael C. Hall, Sarah Silverman, Kate Mara, Rainn Wilson, Judy Greer, Ben Schwartz, Taraji Henson and Ron Rifkin.
IFC is releasing the film in theaters on March 25th with a VOD debut on February 9th. Check out the trailer from Yahoo below and let us know what you think!