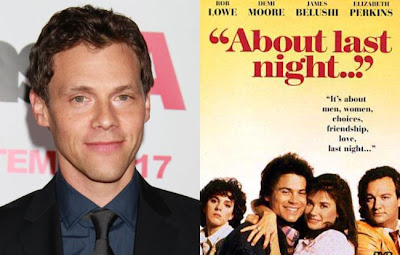 Hot off of the success of Easy-A, Will Gluck is now attached to produce the upcoming remake of the 1986 romantic comedy About Last Night for Screen Gems.
Gluck will produce under his Olive Bridge Productions banner and is currently focused on finding a director and writer for the remake. Edward Zwick directed the original film which starred Rob Lowe, Demi Moore, James Belushi and Elizabeth Perkins. The story focused on a “couple who start a romantic affair despite their friends’ disapproval.” It was based on David Mamet’s 1974 play Sexual Perversity in Chicago.
Gluck recently wrote and directed Friends With Benefits starring Justin Timberlake and Mila Kunis, which is set for release on July 22. He will work again with Emma Stone on an untitled comedy that he is set to write, direct and produce. “
I really liked Easy-A and think that Gluck has a good command of this genre. About Last Night is one of my favorite Rob Lowe film and is a true 80’s classic.  I am fine with a remake, but hope that they do it justice. Zwick did a really solid job of directing. The key factor for this films success is likely to be the lead stars they are able to attract to the roles.
What are your thoughts of yet another remake coming to theaters?
Source: Variety