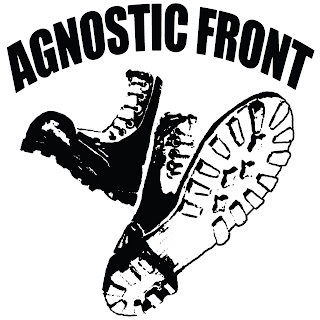 The Godfathers of New York Hardcore, AGNOSTIC FRONT, are gearing up to release their new full-length, My Life My Way, on March 22nd!  In preparation, they’ll release two songs to the masses on the That’s Life 7inch, which will be available March 8th from Bridge Nine Records.On their third collaboration with the band and second time working together with a pre-release album 7inch, Bridge Nine Records couldn’t be more excited about the partnership.
Label owner Chris Wrenn commented,

“One of my most proud moments here at B9 was re-releasing the Victim In Pain and United Blood records from Agnostic Front in November ‘09.  And to open the doors to do so, we worked with AF prior to that on a pre-release 7inch for their album Warriors on Nuclear Blast.  It was awesome working with both the band and the label, so we figured – with a new full-length coming out – why not do it again?”

The That’s Life 7inch will feature two songs from My Life My Way – “That’s Life” and “Us Against The World” – and will be extremely limited to 2,000 copies worldwide.  1,000 copies of the 7inch will have silk-screened B-sides, while the other 1,000 copies will have hand-etched B-Sides.  More information and photos coming soon to Bridge9.com.
My Life My Way features 13 new powerful and anthemic songs laid down by Erik Rutan (MADBALL, GOATWHORE, CANNIBAL CORPSE, etc.) at his Mana Recording Studio in Tampa, FL under the watchful guide of producer Freddy Cricien of MADBALL. Vocalist Roger Miret commented on the new material: “After all is said and done we are amazed on how great our new record turned out! It’s by far our catchiest record to date and it’s going to make everyone want to sing along for sure. Freddy killed it on the production end, just capturing that hardcore vibe that only he can get out of AGNOSTIC FRONT. The boys all put nothing but passion into the songs, and Erik Rutan just dialed it all in to make AGNOSTIC FRONT sound as natural and as organic as ever. This one will definitely be a classic once it’s heard worldwide!”
For more info visit: www.myspace.com/agnosticfront & www.agnosticfront.com
www.Bridge9.com / www.NuclearBlast.com