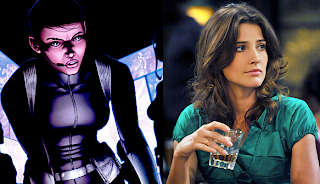 Cobie Smulders (How I Met Your Mother) is in talks to play S.H.I.E.L.D. agent Maria Hill in Joss Whedon‘s The Avengers.

The deal will likely be inked before the weekend is over. This is the unidentified female character that Samuel L. Jackson recently revealed would be in the movie as Nick Fury’s sidekick. Hill isn’t really a sidekick character at all, she was actually a director of S.H.I.E.L.D.

Smulders is the first choice from a short list of actresses that also included Morena Baccarin (V), Jessica Lucas (Cloverfield) and Mary Elizabeth Winstead (Scott Pilgrim). This is a sweet gig for Smulders, who also signs on for a nine-picture Marvel option.
I think that Smulers is a decent choice for the role S.H.I.E.L.D. agent Hill. What are your thoughts of Smulders being cast in the role?
Below is a detialed rundown of the character Maria Hill for those who are unfamiliar:
Originally from Chicago Maria Hill joined SHIELD and rose to the position of commander. After Colonel Nicholas Fury’s “Secret War” Maria was chosen to be director of SHIELD by the President himself after he commended her on her work while she was stationed on assignment in Madripoor. Although many others who she herself admitted were better suited for position were not considered for directorship she was assigned director. It has emerged that Maria was chosen as the other candidates were “Fury Loyalists” and SHIELD needed “new direction”.
At first Hill had her differences with Iron Man (Tony Stark) and the New Avengers. Mainly due to the fact they withheld information on the “House of M” event leading to “M-Day”. After Hill arrested Spider-Man, unmasked him and used SHIELD psychics agents to probe his mind for information regarding the “House of M” events, Maria redeemed herself to them by not following the presidents advice and bombing the island of Genosha to disable a current threat as the Avengers were present at the time.
Before the “Superhuman Registration Act” was passed as law, Hill met with Captain America (Steve Rogers) aboard the helicarrier and proposed that he lead the Avengers within the law and arrest anyone who would not comply. Captain America declined her offer, stating that he would not arrest people who risk their lives for their country every day of the week. Upon his failure to comply Hill ordered her superhuman response team or “cape killers” to tranquilize Captain America. During the scuffle Rogers avoided being tranquilized and escaped becoming the de facto leader of the Secret Avengers.
After the “Civil War” had ended Hill stepped down as directer giving the position to Iron Man Tony Stark and has resumed her duties as commander for SHIELD.
Source: Deadline

SUPERMAN's female lead to be a villain

Banners for THE AVENGERS arrive online