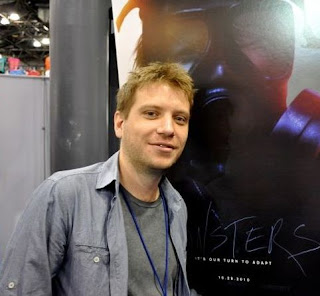 Gareth Edwards shared some details recently while doing press for Monsters which came out on DVD/Blu-ray this week!
He spoke to Shock Till You Drop about his for plans for the reboot of Godzilla for Legendary Pictures. He wasn’t able to share too many specifics, but the director assured fans that the franchise will be handled with respect. Edwards was able to share very small details about his hopes for the project,

I guess I will say I’m highly aware – and everyone involved is incredibly aware – of everyone’s opinions on what this film has to do and what it has to be. And no one will do anything but the right thing. Without addressing anything specific, everyone knows how important is to get it right.

Edwards confirmed he is not writing the project, and he wouldn’t say who was. Here’s what the director had to say about his relationship to the Godzilla franchise.

My earliest memories was channel 4, they showed them every Friday night. As a kid I wasn’t quite sure about the dubbing, the English-dubbed versions. They threw me for a bit. I love science fiction and, well I call them B movies but they’re not, but I love ’60s and ’70s sci-fi. But these would come on and be dubbed and it would take my kid brain to adjust to the dubbing. It took me some time to get through that.

Here is what Edwards had to say to the London Evening Standard,

Everyone involved knows what the film has to be, what’s important to me is that, as well as spectacle, you have to give a shit about what’s happening and why.

I have yet to see Monsters, but it’s on DVD/Blu-ray today and will be streaming soon on Netflix. I’m sure I have faith that Edwards will do a great job with this gigantic budget of the film.
What are your thoughts on Edward directing this reboot?