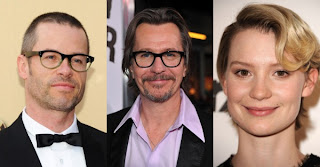 Guy Pearce, Gary Oldman and Mia Wasikowska have joined the cast of John Hillcoat‘s film Wettest County in the World. Jason Clarke is also joining the cast. They join Shia LaBeouf, Tom Hardy and Jessica Chastain who have already been cast.

The film is based on the novel The Wettest County in the World by Matt Bondurant. The story is based on Bondurant’s grandfather and two great-uncles and details the saga of the Bondurant boys, “bootlegging siblings who take the law into their own hands in Prohibition-era Virginia while making a run for the American Dream.” The screenplay was written by Nick Cave.
Pearce stars as an overly violent deputy who faces-off against the Bondurants while Oldman will play a gangster who hires the boys to deliver alcohol.
Wasikowska (Alice in Wonderland and The Kids Are All Right) will play LeBeouf’s love interest, a local Mennonite girl. Clarke (Chicago Code) is playing the brother to LaBeouf and Hardy.
The film is currently in pre-production in Georgia with shooting to begin on Feb. 28. This film is definitley on my radar becasue of this great cast. I love period pieces and it will be interesting to see how Cave’s script turns out.
What are your thoughts on this news?