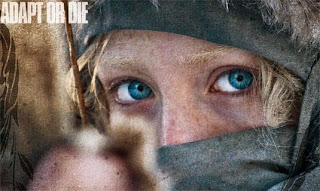 Focus Features has released a new international trailer for Joe Wright‘s Hanna.
The film stars Saoirse Ronan (The Lovely Bones) as a 16-year-old killing machine who has been “raised from childhood to be the perfect assassin by her ex-CIA man father (Eric Bana) in rural Finland.” The supporting cast includes Cate Blanchett (Robin Hood), Eric Bana (Star Trek), and Niels Arestrup (Un Prophète).

Hanna (to be played by Ms. Ronan) is a teenage girl. Uniquely, she has the strength, the stamina, and the smarts of a solider; these come from being raised by her father (Mr. Bana), an ex-CIA man, in the wilds of Sweden. Living a life unlike any other teenager, her upbringing and training have been one and the same, all geared to making her the perfect assassin. The turning point in her adolescence is a sharp one; sent into the world by her father on a mission, Hanna journeys stealthily across Europe while eluding agents dispatched after her by a ruthless intelligence operative with secrets of her own (Ms. Blanchett). As she nears her ultimate target, Hanna faces startling revelations about her existence and unexpected questions about her humanity.

This is a major departure from Wright’s past films, which have included the period dramas Atonement and Pride & Prejudice. The initial screenplay was written by Seth Lochhead. He also wrote subsequent drafts, as have David Farr, Joe Penhall, and Wright.
Hanna arrives in theaters on April 8th 2011