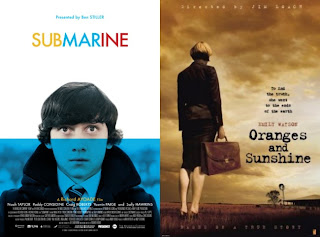 Here are the international trailers for Submarine and Oranges and Sunshine!
Oranges and Sunshine is the directorial debut of Jim Loach (son of director Ken Loach). The film stars Emily Watson, Hugo Weaving and David Wenham.  Check out the trailer below and share your thoughts!
Submarine is also the directorial debut of Richard Ayoade. The film stars Paddy Considine, Noah Taylor, Sally Hawkins, Craig Roberts and Yasmin Paige.
Ayoade write the script which is based on Joe Dunthorne’s novel that tells the story of Oliver Tate (Roberts), a 15-year-old boy who must fight to save his mother from the advances of a mystic and simultaneously lure his eczema-strafed girlfriend in to the bedroom armed with only a vast vocabulary and near-total self-belief.
Check out the trailer below and share your thoughts!
Source: RopesOfSilicone