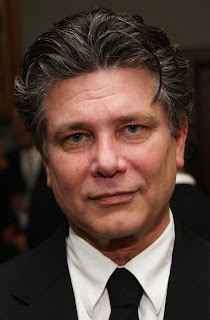 Steve Zaillian has been hired by Paramount to rewrite the new Jack Ryan film.

He recently scripted The Girl with the Dragon Tattoo and he’s signed to also adapt The Girl Who Played with Fire.

Jack Bender (Lost) is directing Chris Pine who will play the role of Jack Ryan. This will be an original film based on the Tom Clancy-created series, which Lorenzo di Bonaventura is producing. It has to do with a terrifying helicopter crash that nearly killed Ryan when he was a 23-year old platoon leader in the US Marines. He was the only member of the platoon to survive.
The project currently has no official start date and is yet untitled. The plan is for production to begin this year and has been referred to as Moscow, a story that supposedly had it’s launching point in Clancy’s The Hunt for Red October, which starred Alec Baldwin.
Zaillian has experience with Jack Ryan. He wrote the 1994 film Clear and Present Danger, the last film that starred Harrison Ford. I’m told he also did a major uncredited rewrite on Patriot Games, the first second film in the original series.
Hossein Amini, Adam Cozad, Anthony Peckham have all worked on the script and now Zaillian will take the project home for Paramount. Paramount is co-financing the film with David Ellison’s Skydance. I loved the original films and always thought it was a shame that Ford never did another Jack Ryan film. I think Chris Pine will be a perfect Ryan from Zaillian’s script.
What are your thoughts on the news?
Source: Deadline