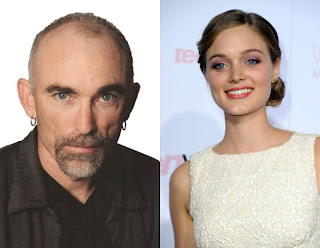 According to Deadline, he’ll take the part of Willie Loomis if cast. The story also revealed that Bella Heathcote is the first choice to play Victoria Winters in the film, the young governess of the Collins estate. They will both star alongside Johnny Depp who is playing Barnabas Collins.

I’ve yet to watch the original original 1960’s Dark Shadows series. Deadline gives a little more detail on the character Haley will play, which is apparently a decent sized role. The story explains that the “Loomis role was a pivotal one on the soap. Loomis is a notorious con artist who comes to Collinwood bent on swindling the reclusive matriarch Elizabeth Collins Stoddard. He winds up living in the mansion and hatches a plan when he observes a portrait of the late Barnabas Collins, who wore some serious bling. Loomis breaks into the mausoleum and pries open Barnabas’ coffin expecting to steal jewelry, he’s given the shock of his life when he’s attacked by the vampire and rendered the servant and whipping boy of the bloodsucker.”
I am glad that Jackie Earle Haley is continuing to get more roles, he is an awesome actor. I also think that  Heathcote is a good addition Tim Burton’s universe.
Share your thoughts on the casting below!