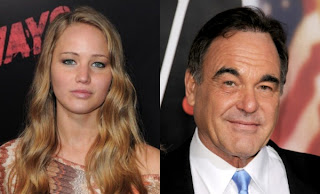 Jennifer Lawrence (Winter’s Bone) is currently in talks to star in the feature adaptation of Don Winslow’s Savages for Oliver Stone.

Shooting is slated for June and will follow the story of “a love triangle between two best friend pot growers and O (Lawrence), the care-free girlfriend they share.  Somehow, sharing a bed with O created no discord in the relationship between brainy botanist Ben and Chon, a hardcore ex-Navy SEAL who returned from Afghanistan with top-quality pot and a total lack of remorse for killing to protect his pals. They live a quiet lucrative existence in Laguna Beach, growing and distributing their primo pot.”
Leonardo DiCaprio, Aaron Johnson, Tom Hardy, James Franco and Garrett Hedlund are all on the list of actors that Stone is meeting with to fill the roles of Ben anc Chon. The director also hopes to have Benicio Del Toro play “a Mexican drug cartel enforcer sent to muscle Ben and Chon out of business. When they resist, O gets kidnapped and the ransom is every ill-gotten cent they’ve made. They hatch a complex plan to get her back and then disappear.”

The project has been developed privately and is currenlty a hot commodity for a number of studios. The shooting script was written by Winslow & Shane Salerno, based on the bestselling novel that made The New York Times top ten list. Moritz Borman is producing with Stone. Salerno is executive producer.

This sounds like an amazing story that deserves the big screen treatement. I love Jennifer Lawrence and think that this is the perfect role for her. I am interested to see how this turns out.
What are your thoughts on this news? Who would you like to see in the roles of Ben and Chon?

Stephanie Meyer's THE HOST finds a director in Susanna White