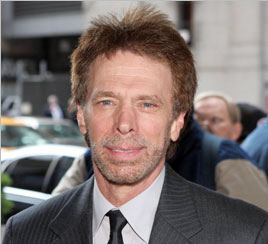 Jerry Bruckheimer has a new space adventure film in development based on a pitch from Prometheus scribe Jon Spaihts.
This marks the second deal for Spaihts with Bruckheimer. He adapted the graphic novel World War Robot late last year. This original story follows a small band of humans and robots facing off in a battle on Earth, the moon and Mars.
Spaihts recently worked on the upcoming film The Darkest Hour in 3D for New Regency and Summit. His first job was on Shadow 19 and followed up with Passengers, a space journey project he wrote withKeanu Reeves attached to star.
Spaihts originated the scrip fro Fox’s Prometheus, currently in pre-production with Ridley Scottdirecting. Bruckheimer is overseeing the post-production for Disney’s Pirates of the Caribbean: On Stranger Tides, due out May 20.
I am a sucker for any space related adventure film, so this is right up my alley. I have high hopes for Prometheus, so it is good that Spaiht is behind this story as well.
What are your thoughts of this news?
Source: Variety

Werner Herzog has his QUEEN OF THE DESERT in Naomi Watts