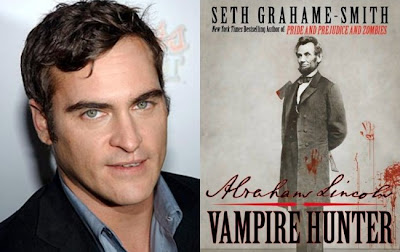 He would play Henry Sturgess, the President’s mentor who teaches him how to kill vampires.

Phoenix is close to inking a deal project which would have him starring alongside Benjamin Walker, who was cast last week as the title character. Timur Bekmambetov is directing the film adaptation of the Seth Grahame-Smith novel whose producers include Tim Burton.
This role would mark his first film since he starred in I’m Still Here, the mockumentary directed by Casey Affleck that was purported to follow Phoenix as he embarked on career as a rapper. I have been a fan of Phoenix since he first starred in Parenthood with Steven Martin. My favorite performance of his isWalk The Line with Gladiator a close second.
The role of Henry would be a great one for him in my opinion. His character would be a mythic, ageless figure who turns Lincoln into an axe-throwing expert slayer of vampires. Nothing is set in stone, Phoenix could decide not to go forward. We will keep you posted as the story develops.
What are your thoughts of Phoenix starring in the film?